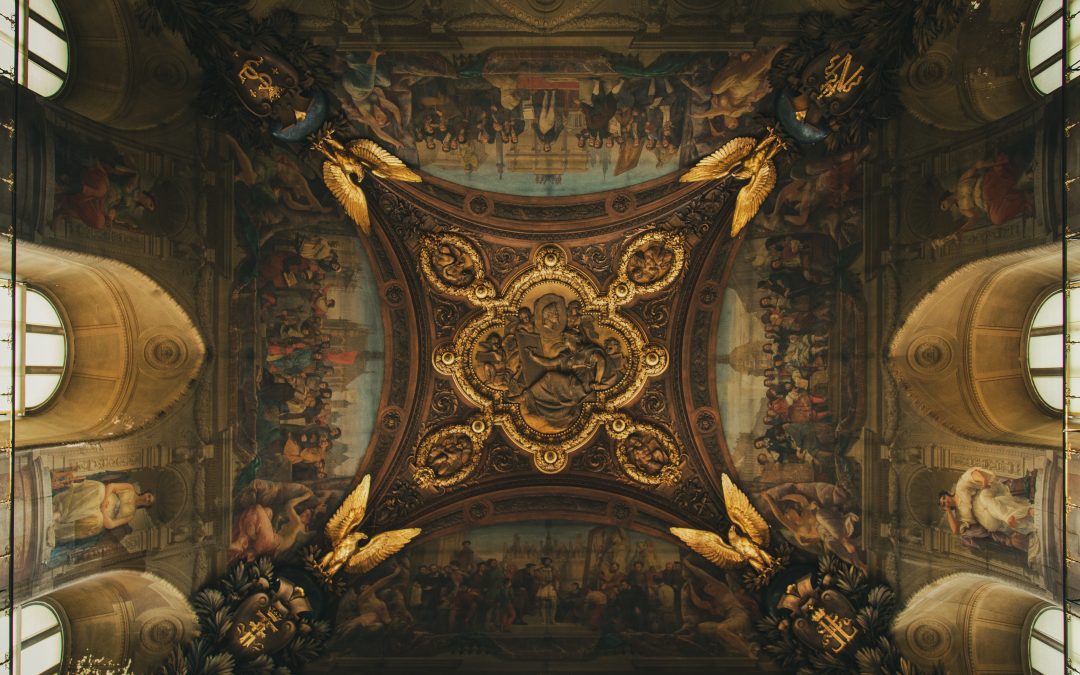 The question standing before every theologian and layperson who would venture upon the doctrine of God is: If God is transcendent, how can He be immanent? Some may reverse that question to be thus: If God is immanent, how can He be transcendent? No matter how the studious onlooker chooses to frame the question, there is a pressing issue afoot. If God is so transcendent and, as it were, beyond, in what sense is He immanent (if at all)? These are two mutually exclusive properties, much like simplicity and complexity, or immutability and mutability. Immanence would seem to require not only a likeness of analogy between Creator and creature, but some point of identification or equality.

This so-called tension shows up in Dr. Jeffrey Johnson’s recent book, The Failure of Natural Theology (particularly in ch. 9). But whereas I’ve exhausted the limits of my attention on that volume, you can read my reviews for more information. Suffice it to say that the aforementioned tension is not resolved in that book, and the reason for this is because Johnson, along with many others, tend to view transcendence and immanence as equally ultimate in God. Each must, in some mysterious way, mutually exist in God at the same time and in the same relationship, or so it is thought.

Sometimes, the can is kicked further up the road when certain theologians view the transcendence “part” of God as His unity, while understanding His immanent “part” in terms of trinity. His oneness is not personal, whilst His threeness is. The Trinity, it is thought, is the mechanism we ought to use to explain God’s immanence. This proposed dynamic is, in case you’re wondering, carried over into simplicity, immutability, et al. God as one is simple, but as Trinity He is complex; God as one is immutable, but as Trinity He is mutable. Such are the modern conjectures.

God In Himself (ad intra) Is Transcendent, Not Immanent

I think it is important to first begin by saying—God is not one and many in Himself. He is one in many. What I mean is this: the divine essence, which is one and only one, subsists in three distinct relations—Father, Son, and Spirit. But it is not as if there is one God and three Persons side-by-side, our job being to hold those two seemingly exclusive realities together in an odd, even illogical tension (punting it all to mystery when pressed). Instead, there is one God who exists in three modes, Father, Son, and Spirit.

To qualify, the term mode is not being used here as it is in the famed heresy of old, modalism. Modalism posits one divine person who reveals himself in three modal appearances throughout redemptive history.

When we say the distinction between God’s essence and the three Persons or relations is modal in nature, we are referring to the manner of existence of the one divine essence, that is, in three Persons. This means oneness and threeness do not represent two equally ultimate existences in God, as the modern language wants to suggest. It means the one transcendent essence exists in three distinct modal relations, each of which possesses in full that same divine essence.

Dr. Richard Muller, leaning on Zanchi, says, “It is also the case, that the absence of any ‘real distinction’ between the divine essence and its attributes stands in the way of any full communication of divinity to a creature (PRRD, vol. 2, 279).” Peter van Mastricht, Muller notes, also uses language of omni-modality, e.g. simplicity is “original and omnimodal (Theoretical-Practical Theology, II, 6.20.22).” In other words, God is simple in all that He is.

The “tension” between God’s transcendence and immanence, if such a tension actually exists, would have us believe simplicity must at once coexist with complexity in God’s essence. God would have to be both simple (transcendent) and complex (immanent), since complexity would be requisite to a proper immanence in relation to creatures, all of which are composed of parts. But the temptation to “fix” this tension by making the divine essence the transcendent “part” in God, and the Trinity the immanent and complex “part” in God is misguided since it wouldn’t fix any problem at all.

In point of fact, it would swallow up transcendence altogether since God would be one part simple and another part complex. Which is just to say God would be fundamentally complex, composed, as it were, of two parts—transcendence and immanence. This duality, or complexity, would be properly basic in God. There would be no unifying factor beneath or behind it.

To avoid postulating this duality in God, which no doubt results in contingency, dependence, and holistic immanence, we should understand God as absolutely transcendent, simple, immutable, etc. And we should understand that this absolute transcendence exists not with but in three Persons or hypostases—these three Persons being the modes according to which the divine essence just is. If we say God’s essence exists along with (rather than modally in) the three Persons, we substantiate the Persons and differentiate them from the essence. At such a point, the essence is either personified (making a fourth person) or it is meaningless, a sentiment no doubt leading to tritheism.

For the personal properties by which the persons are distinguished from the essence are certain modes by which it may be characterized; not indeed formally and properly (as modes are said to be in created things, which as finite can be differently affected and admit modes really distinct and posterior to the thing modified, which cannot fall on the infinite and most perfect essence of God); but eminently and analogically, all imperfection being removed. Thus the person may be said to differ from the essence not really (realiter), i.e., essentially (essentialiter) as thing and thing, but modally (modaliter)—as a mode from the thing (modus a re) (Institutes, vol. 1, 278).

The Persons, therefore, are not formal or real distinctions in the essence, which would imply a division (complexity) therein, but are modes in which the essence exists.

But… God Is Immanent. So, Now What?

Though God is absolutely transcendent, having all imperfections or attributes of creatureliness removed from Him (via negativa), God has most certainly brought His creation into relationship with Himself. The only question becomes, “In what way?” Many contemporary theologians assume that in order for God to relate to creation, He must relate as creatures relate to other creatures. But this is not the case, and to formulate a doctrine of God based upon that assumption is to do theology backwards.

Rather than the assumed relationship informing our understanding of God, our understanding of God ought to be informing our view of His relationship to the world. The question before us is, “How is God immanent, if He is?” God is not immanent, ad intra. All creatureliness must be removed from His essence. God the Father, God the Son, and God the Spirit must have every creaturely attribute and imperfection removed. What applies to the single essence applies to them. Naturally, some want to ask, “Okay, then how can God be immanent if that’s the case?”

It is assumed that if God cannot take on some kind of creatureliness (change or complexity), He cannot be immanent in any sense. But what if, short of thinking God becomes creature-like, we only say He brings creatures into relation to Himself? In this case, God affects change in His creatures without Himself undergoing any change, i.e. “with whom there is no variation or shadow of turning (Jas. 1:17).” Immanence, therefore, would be a creaturely term we use to describe God’s work of creation, and His self-disclosure through revelation. And revelation, we must understand, is fitted to finite understanding (analogical).

It is in the incarnation where God the Son brings into union with Himself the fullness of human nature. This does not result in a change or diminution in the divine essence anymore than does the creation itself. The Person of the Son, therefore, is immanent, not in His divine nature but in His human nature—a crucial distinction to keep in mind. The Second London Confession states—

The Son of God, the second person in the Holy Trinity, being very and eternal God, the brightness of the Father’s glory, of one substance and equal with him who made the world, who upholdeth and governeth all things he hath made, did, when the fullness of time was come, take upon him man’s nature, with all the essential properties and common infirmities thereof, yet without sin; being conceived by the Holy Spirit in the womb of the Virgin Mary, the Holy Spirit coming down upon her: and the power of the Most High overshadowing her; and so was made of a woman of the tribe of Judah, of the seed of Abraham and David according to the Scriptures; so that two whole, perfect, and distinct natures were inseparably joined together in one person, without conversion, composition, or confusion; which person is very God and very man, yet one Christ, the only mediator between God and man.

God is both transcendent and immanent, but not in the equally ultimate sense. He is absolutely transcendent, ad intra. He is immanent ad extra, or through the change He brings about in His creatures (relating them to Himself rather than Himself to them), leaving His being unchanged; and also His self-disclosure (revelation), which He produces in terms apprehendable by His finite creatures. The apex of this is the incarnation of the Son of God, who is the express image of the Father. Interestingly enough, when God is closest to us, that is, in Christ, He is closest to us in human nature, and not immediately in His divine nature. If God were not absolutely transcendent, this would not need to be the case.

Something else could be said about how we should be careful not to confuse this absolute transcendence with something like Karl Barth’s “wholly otherness.” Absolute transcendence does not preclude all analogy between God and creature. It only precludes certain kinds of similarities, such as (what Thomas calls) equal and imperfect likenesses. But this is an article for another day.