The King & His Throne 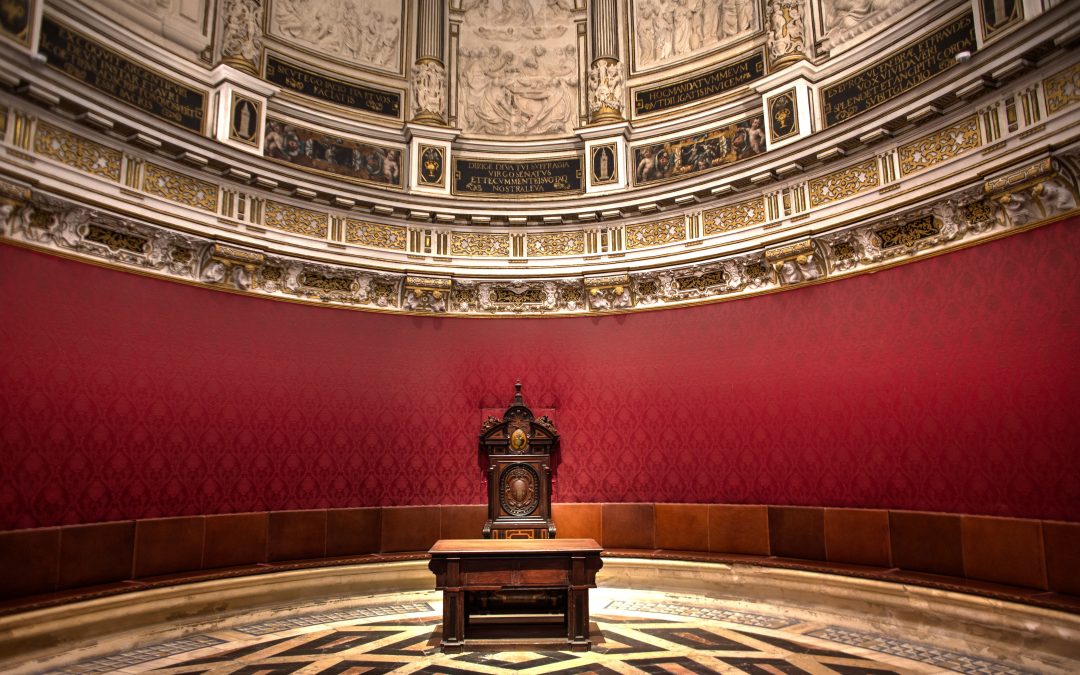 It was May 14, 1948, just a few years after the end of the war, when David Ben-Gurion declared Palestine to be an Israeli nation-state. Then U. S. President, Harry Truman, joined Ben-Gurion in recognizing Israel’s sovereignty. Since that time, discussion surrounding the biblical significance of the reconstitution of “Israel” has erupted. Trying to describe the extent to which this geo-political development has been shoved into biblical interpretation would perhaps be the understatement of the millennium (pun intended). Political Zionism has been fused with Christian theology in a sometimes unhealthy and, I would argue, an altogether wrong way.

The advent of the political nation of Israel spurred an immediate materialism in terms of what Jesus’ kingdom actually was/is. What do I mean? I mean that Christ’s kingdom, as well as His kingship, became nigh entirely visible, which meant that it could in no wise obtain at present. Christ is not yet king because He does not yet rule in Israel. Dwight Pentecost writes:

David’s son, the Lord Jesus Christ, must return to the earth, bodily and literally, in order to reign over David’s covenanted kingdom. The allegation that Christ is seated on the Father’s throne reigning over a spiritual kingdom, the church, simply does not fulfill the promises of the covenant … A literal earthly kingdom must be constituted over which the returned Messiah reigns (Things to Come, pp. 114,115).

For Pentecost, Christ has a non-literal (?) kingdom now, and will have a literal kingdom later. There is an implied reduction going on here between the Father’s kingdom, i.e. throne, on the one hand, and the Son’s (Davidic) kingdom on the other. And there is a distinction made in places like Revelation 3:21, “To him who overcomes I will grant to sit with Me on My throne, as I also overcame and sat down with My Father on His throne.” Christ’s throne, it is imagined, will be the throne established in political Israel, and the Father’s throne is the heavenly throne.

In John 1:49, Nathaniel declares Jesus to be the King of Israel. And in 12:13, on Palm Sunday, Jesus is announced, “The King of Israel!” In Matthew 2:2, the Wise Men came, saying, “Where is He who has been born King of the Jews? For we have seen His star in the East and have come to worship Him.” In Zechariah 9:9, we read, “your King is coming to you; He is just and having salvation, Lowly and riding on a donkey, A colt, the foal of a donkey.” This prophecy was fulfilled in Matthew 21, where Jesus is consciously declaring Himself to be King through His very intentional fulfillment of Zechariah 9:9. When the Pharisees told Him to rebuke the disciples for declaring His royalty, He responded, “I tell you that if these should keep silent, the stones would immediately cry out,” signifying His kingship over, not only Israel, but all creation (Rom. 4:13).

There are several places where Christ’s past, present, and future kingship are asserted. Yet one of the most striking places, perhaps one of the places less thought of as a “kingship” text, is 1 Timothy 6:13, “I urge you in the sight of God who gives life to all things, and before Christ Jesus who witnessed the good confession before Pontius Pilate.” In v. 12, Timothy is said to have also confessed the good confession. It’s not immediately clear what these two confessions are. Assumedly, they are the same confession, or at least, what Timothy confessed was something first confessed by Christ. Timothy, then, followed in Christ’s footsteps by making this same confession.

Paul gives us a hint as to where to find this good confession. He says Jesus witnessed it “before Pontius Pilate.” And he hints at the confession’s identity in v. 15, “which He will manifest in His own time, He who is the blessed and only Potentate, the King of kings and Lord of lords.” Not only does Paul clearly understand Jesus as a King presently, and presently ruling, i.e. “only Potentate,” but he is also referencing a place wherein Jesus declared Himself to actually and presently be King. In John 18:37, we read:

Pilate therefore said to Him, “Are You a king then?” Jesus answered, “You say rightly that I am a king. For this cause I was born, and for this cause I have come into the world, that I should bear witness to the truth. Everyone who is of the truth hears My voice.”

What was the “good confession” Christ made before Pontius Pilate? It was nothing less than His kingship. In fact, Jesus goes further by saying, “For this cause I was born.” And, of course, this cause was declared in Luke 1:32 by the angel Gabriel, “He will be great, and will be called the Son of the Highest; and the Lord God will give Him the throne of His father David.” It is stated once more in Acts 2:30, “Therefore, being a prophet, and knowing that God had sworn with an oath to him that of the fruit of his body, according to the flesh, He would raise up the Christ to sit on his throne.”

I am perfectly fine with understanding a future, or consummative significance to Christ’s inherited throne, i.e. the throne of David. But what many in dispensational circles have done is move any and all of Christ’s kingly reality into the future—to the harm of the text of Scripture I might add. Instead, I think we should understand Christ’s kingship as having been inaugurated at His first coming, especially with the fulfillment of His work. Yet, we await the consummation, or completion, of that kingship upon His return.

I also do not see the need to locate Christ’s kingly rule in a political nation established through carnal means and built up by the hands of men. In fact, I believe that degrades the glory of Christ, and it also misunderstands the function of typology, e.g. that found in 2 Samuel 7 and elsewhere. Christ does not have to possess the throne of His father David as David possessed it. In fact, if David and His throne were typological of Christ and His throne, and they were, then the type necessitates Christ actually inherit something other and greater than what David had. Just as Christ hasn’t merely merited a return to the garden state, but something greater, so too Christ has merited a greater throne toward which David’s throne in historical Israel could only look.